skip to main | skip to sidebar

I'm playing with the other kids at the minute so probably won't be posting on here anymore. Come and say 'Hello!' over here instead

With only 8 days left of the year I thought I'd take the oppurtunity to mention a couple of things I've been involved in this year but hadn't really wrote about.

White Noise Festival - I've played three of these now and each one has been immense fun to be involved in and anyway I can support this event I will do. The Christmas 2009 show saw the line up braden even more and was a real success. All proceeds from the event go to LOROS. A compilation cd was produced for the Summer 09 and Christmas 09 events which you can get from here. I encourage you to buy the White Noise Two comp as it is great (Death of London's Kiri Kiri is a short sharp masterpiece) and the money you pay will go to charity. Do it.


Pacific Ocean Fire - my good friends POF called it a day this year. I've known them all for a long time and in the last year and a half had become kind of a part time member (that's how I like to think about it!) so the oppurtunity of wigging out with them dissapearing saddens me no end. I am very proud to have contributed to their final work Hibernation Songs and recommend you check the Biily-O out of it.

There was also the tape - did I mention that?

Plans are afoot for 2010 - going to try and record the full version of 'Spring' (aka the birdy song) in the early part of the year to hopefully release March-ish time. There is still talk of a film of sorts and also the possibilty of a one off audio-visual collaboration in the summer, which if it goes ahead will be both nerve wracking and amazing.

Merry Christmas, my loves.
Posted by Peter Wyeth at 08:08 15 comments:

This friday 4th December - sleigh bells at the ready!

Should be a great night and all proceeds go to LOROS.

Here's some really nicely shot footage of some people mucking around on bikes.

Trackstanding in the City from Makinov on Vimeo.

Here is some video shot by Mr Sean Clark of Cuttlefish Multimedia of the show I did at the Independant Arts Centre as part of OXJAM.


There is a full podcast of the entire show available from here - http://pineapster.com/profiles/stenchcast
& here
http://cuttlefish.jellycast.com/node/34

(There were some nerves involved in this.....my introduction sounds like I'm doing a powerpoint presentation on shipping statistics)
Posted by Peter Wyeth at 06:20 1 comment:

And later this winter....

Summer Sundae Weekender is a three day festival in my home town of Leicester. It's a great turn with a wide mix of bands split over four stages as well as a comedy tent, the Phrased and Confused tent and other festival jollity. It has a wonderful atmosphere and it's small size is much of it's appeal. I've been to a few and I've always enjoyed them. Apart from getting to do a couple of songs on The Musician stage a few years ago, I've never played (insert shoulder shrugging image here) but this year I got asked to be involved with the Fringe festival events.
The SSW fringe festival used to be a one night warm up party the night before the festival began a proper. This year it was a fortnight long program of events including two photo exhibtions. I was asked to play the launch night at the LCB Depot and one the Fringe warm up night gigs on the thursday before SSW kicks off.
I enjoyed every nerve racking minute of it. The LCB depot gig saw me turn out 27 minute run of 'Spring' replete with some new field recordings. I got to play with Pacific Ocean Fire afterwards as well (and they are soooo good at the minute). On the thursday I played at the New Road Inn with POF again and the Falling Leaves and managed to completely go off on one. The Fringe events all raise money for LOROS too, so as well as loads of ace gigs happening around the city on one night all the people who come to see the acts play are helping others.
Below are a couple of photos capturing my grey haired mastery of singing birds and glockenspiels and something really nice that was written about me in the Firebug guide to the festival (thank you!!!). There shall be another post about the cassette soon as I have them in my possession. Ta!
Photos are by the lovely Jennifer Anne Simpson. 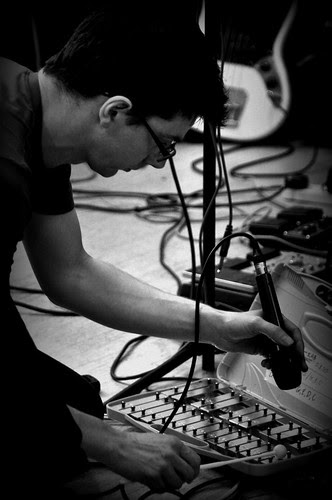 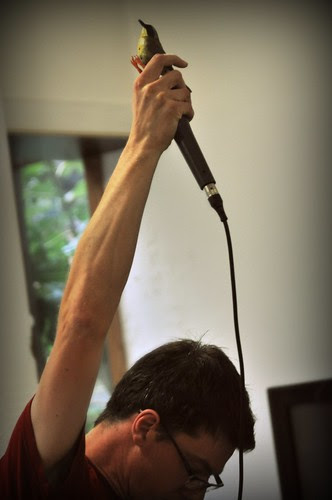 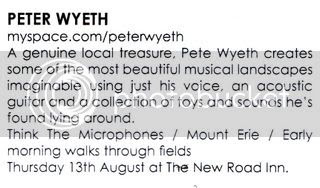 Something at the end of May/beginning of June, still to be confirmed.